Chimuo Nureki had perhaps the longest and most varied history of bakushi. His reputation as a rope artist and career stretching over five decades earned him a worldwide following. Prior to his death, he was called "The greatest living...kinbaku master".[1] Throughout his career, Nureki has been a prolific writer and his work often appeared in iconic Japanese SM magazines such as Kitan Club and Uramado. He was closely associated with the founder of Uramado and kinbaku legend, Kou Minomura. Nureki was also one of the few contemporary bakushi to have had personal contact with Seiu Ito. His writings included magazine articles, books, television and movie scripts as well as scripts written for live pink theater performances. Nureki also appeared in numerous videos and was an early performer in videos produced by Art Video. He was one of the featured rope artists in the Hiroki Ryuichi documentary, Bakushi.

1930: Chimuo Nureki was born in Asakusa, Tokyo, and was the third generation of his family to be raised there.

1940: While a fifth grade elementary school student, Nureki saw a picture by Kashou Takabatake in which a boy was tied with his hands behind his back, and he became fascinated with pictures which appeared to show seppuku[2][※ 2].

1940s: Nureki made a poster at the Health and Welfare public relations office of the Hitachi factory in Kameari where he was assigned during student mobilization[2][※ 3].

1945: After the war, Nureki became an apprentice to Fukunosuke Ichikawa, a kabuki actor who played female roles in Shinsei Hanagata Kabuki[2][※ 4].

1946: Another contact with Seiu Ito, this time at the Suzumoto Theater in Ichikawa City, Chiba Prefecture[3].

1946: Nureki spoke with a kabuki troupe and enrolled in a jidogeki theatrical company[2][※ 5]. Nureki's first work was as an extra in a Toho movie co-starring Roppa Fukukawa and Ichirou Kagami[2][※ 6].

1953: Nureki became acquainted with Kitan Club around the time he was sent by a Tokyo design company to Nagoya, where he worked on a clothing-related advertising magazine[4][※ 7].

1953: Pleasurable Punishment Performer was accepted for the November 1953 issue of Kitan Club[※ 8]

1953(c): Nureki saw Seiu Ito while at a performance of Burned Alive at the Suzumoto Theater.

1954: Publication of the March issue of Kitan Club is suspended. Nureki published the content of Demon Sisters (illustrated by by Yagi Shizuo) as Fujio Maki, but there was a problem with release, and sale was prohibited four days later[4].

1955: Kitan Club resumed sales with the October issue under a new publisher, Tenseisya, which oversaw the magazine's cover design (the white cover period). Nureki wrote many of the stories in this issue. 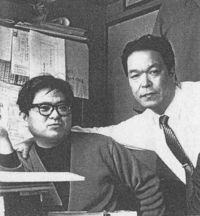 1957: Nureki returned to Tokyo. Shortly before leaving Nagoya, he discovered Uramado magazine in a Matsuzaka book store and came across Reiko Kita's name[4].

1957: Dec. The Pale Man was published in Uramado under the pen name Toyokichi IIda[※ 9]. After that, Nureki contributed to both Kitan Club and Uramado magazines. Later, he paid a visit to Toshiyuki Suma at Uramado's editorial office in Ekoda[3].

1958: Nureki was commissioned by Suma to serialize Breasts From Hell in the May to September issues. This marked his switch to a professional writer.

1958: Dec. Nureki's "White Toy" was the breakthrough prize winner for Kitan Club's 100th issue novel contest, and it was published under the pen name Fujio Maki on page 40 of the December issue.

1959: At a request from Minoru Yoshida, Nureki contributed Don't Set the Breasts Aflame under the name Shinji Fujiki for a novel contest celebrating the 100th issue of Kitan Club[※ 12].

1960: Disappointed by the illustrations in Underground Female Slave Market, he decided to contribute more to Kitan Club[3].

1960: Nureki received inquiries from Minoru Yoshida about moving Kitan Club to Tokyo and becoming its editor-in-chief[3][※ 13].

1964: Uramado ceased publishing in January 1965 and Nureki moved on to Suspense Magazine.

1968: Around this time, Nureki wrote scripts for Troupe Flame, a pink theatrical company belonging to Mari Aoki and Yoko Mizusaki. A few of the scripts appeared in Suspense Magazine.

1970: With Suma, Nureki started up Abu Pro and launched Abumento magazine as its editor-in-chief. Suma served as president[4]. Abumento folded in September of the same year.

1973: The name Chimuo Nureki first appears in the February issue of SM Select. The name comes from the old Chinese saying "A man who chases impossible dreams"[5].

1985: Dec 27. Nureki and Akio Fuji play a leading role in opening the first meeting of Naomi Sugishita's Club. After two meetings, the club's name changes to The Beauty of Bondage Research Society (aka Kinbiken).

1989(c): The Nureki School Rope Dojo is held periodically at the Fuji Planning office in Shinjuku[6][※ 18].

1992: The name Toyokazu IIda appears in Hiroshi Harada's Midori, an animated movie based on an original work by Suehiro Maruo (This could be a different person with the same name. Confirmation required.)

2008: Nureki made a guest appearance as Rokuroku Tabata in the Hana Musubi theatrical company's Spiraling Under.

2009: Kinbiken resumed with its 163rd regular meeting. The models were Hiromi Saotome and Fuyuki Sawado[※ 21].

(A countless number of adult videos)

A handmade pamphlet was produced around 1998.