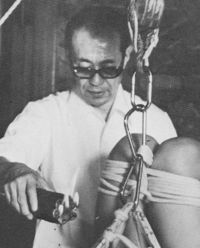 1974(?): Watched Contradictory Confession by Kazuya Mukai. Watched his torment shows once a month[1][※ 3].

1970(?): Started a mah-jong salon called Lotus in Kanda where he had been holding Osada Seminars once a month on Sunday nights at Ars Nova. After about one year, he had to close the mah-jong salon[1].

1976: Keiyu Tamai, who had just moved to Tokyo from Osaka, asked Osada to have his Osada Seminar at the Roppongi stage of Tamai's theater group, Theater Scandal. Several Osada Seminar shows were held there for half a year[1][※ 4].

1978: Started shows in a strip theater, Doutonbori Theater, in Shibuya.

1980(c): Started to hold Osada Seminar at the studio of GSG Planning that was led by Denjiro Sakurada. The models included Mayumi Kurokawa, an actress with GSG Planning [1].

Early 1980s: Appeared on TV show 11PM on the Yomiuri broadcasting network. The show was shot at the studio of GSG Planning [1].

1981: On January 8, had the first performance at Akasaka Blue Chateau which was owned by Mary Aoi. The model was Nami Matsukawa[2]

1983: Appeared in The Document Orgasm (Athena) produced by Tadashi Yoyogi.

1990: Assumed role of president of Tsurumi Shin-Sekai (a strip theater).

1999: Appeared in A World of SM Masters produced by Paradise TV.

2000 Feb 22: Appeared in a program produced by Paradise TV and performed kinbaku in live.

2000: Had an interview from French press.