Seiu Ito was a pioneer on the subject of torment, and his pre-war illustrations and photographs had a major influence on the nascent SM world in Japan during mid 20th century. His influence continues to the present day.

Born in 1882, Ito was strongly attracted to scenes of torture in stories and theater plays from an early age, and he produced a large body of paintings, drawings and photographs depicting scenes of torture and kinbaku, often using his wife or mistress as his model.

By the 1910s, Ito was a newspaper illustrator and then a theater critic. He later became the head of the Performing Arts section as well as the main illustrator for the Yomiuri News. At the beginning of the Taisho period (1912-1926), he met Kaneyo Sasaki (Oyou) and Kise Sahara, two women who would eventually become his models. He deepened his study of torture art and photography, and in the closing years of Taisho, he rode the wave of the eroguro movement and attracted attention as a “painter of perversion”. In 1928, he published his first kinbaku-related book (Seme no Kenkyu – Torment Research), which was soon after banned by the authorities.

During the Taisho period, he established theater groups whose plays centered on torture scenes. Before World War II, he published a large number of collections of graphic works through editor Suikodo Shoten. Ito was at the height of his career, but this was interrupted by the war. After the war, he worked as a writer in magazines such as Ningen Tankyu, Kitan Club and Fuzoku Soshi. In addition, he organized frequent photo sessions, and the resulting photos can be seen as “photos in the Seiyu way” in magazines such as Fuzoku Soshi, Fuzoku Kitan and Uramado. In 1953, he started the Seme no Gekidan (Torture Theater Group) which performed at Ichikawa Suzumoto theater in Tokyo and others.

He was also an historian and his lifelong research culminated in the book Iroha Biki -- Edo to Tokyo Fuzoku Yashi which details the tools and crafts of old Tokyo.

1890: Accepted as an apprentice by Teiu Nozawa, a member of the Edo-based Korin school of drawing; at about nine years of age, discovers his obsession with the perfume of women’s hair as well as punishment scenes in theater plays.

1891: Receives a copy of the story of Chujou Hime (Princess Chujou) from his mother; the scene of torture in the snow leaves a strong impression.

1892: Goes with his parents to the theater Honjo Kotobukiza and watches a performance of Otono Yoshida’s Maneku Furisode (An Inviting Kimono Sleeve); the scene of torture leaves a profound mark.

1894: Becomes the apprentice of ivory carver Seisyu Naito in the district of Honjo Aioi-cho, Tokyo.

1896: In June, Ito goes to the Haruki Theater in the district of Hongo, Tokyo to watch Nisshin Senso Youchi no Ada Tan (Raid Nocturne During the Nishiin War), a play in the Soshi Shibai (Outlaw Theater) where a scene of a nurse being tortured leaves a deep impression.

1898: While still an apprentice ivory carver, uses his free time to draw ropes of illustrations of women published in the Tokyo Asahi newspaper.

1899: In the Tokiwa Theater in Asakusa, is strongly impressed by the torture chamber in the play Akumabarai (Sweep Away the Demons) of Yoshimi Mizuno.

1905: With the intention of becoming a painter, terminates his apprenticeship with the ivory carver and moves to Kyoto; tries different occupations in succession but eventually returns to Tokyo.

1907: Joins the Mai-Chou Shinbun published in the Nihonbashi, Tokyo district as an artist/journalist. He is put in charge of illustrating Yomashima (Ghost Island) by writer Syuhei Arigawa.

1909: Joins the Yamato Shinbun Sha located in Kyobashi, Tokyo in charge of illustrations, while continuing as theater critic at the Maiseki Shinbun; he then joined the Yomiuri Shinbun where he was promoted to head illustrator.

1909: Through an arranged introduction, he marries Takeo, the younger sister of the wife of Terunobu Tamaki (1879-1953), a scenery painter of the Shinpa (new school) movement. Around that time, having gained a steady income and numerous commissions for illustrations, most of his money was spent on entertainment.

1916: Starts a relationship with his model Kaneyo Sasaki (Oyou) and starts drawing his first torture illustrations.

1919: With Kise Sahara, takes photos of snow torture in his garden; the photographer is YuuKa. 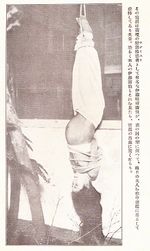 1920: Makes his fist attempt at suspension with his wife Kise Sahara. He also suspends his wife’s younger daughter in his workshop and takes photos.

1921: With Kise Sahara now pregnant, he creates Rinketsu Bijin Sakasa Tsuri no Shashin (Photo in Inverted Suspension of a Beautiful Woman in Her Last Month of Pregnancy).

1923: Borrowing a farmer's house in Shimotakaido from his student Gajou Sakamoto, he brings along photographer Raisui Suzuki to take photos of snow torture. The location was noted for the plum tree in the garden, a feature important to Ito.

1924: Publishes photos of torture of Kise Sahara in Sunday Mainichi. He acquires a reputation for perversion.

1925: Starts a theater group which concentrates on torture scenes.

1927: Publication of the first volume of An Aphabetized Unofficial History of the Customs of Edo and Tokyo by publisher Hirobunkan.

1928: Publishes Torment Research which is quickly banned by the authorities.

1930: Works as contributor and editor for the Kodanzasshi.

1931: Now married for a third time, Ito's wife suffers from mental illness and he goes into debt.

1932: Publishes the sixth volume of his An Aphabetized Unofficial History of the Customs of Edo and Tokyo.

1945: His home is destroyed during the Great Tokyo Air Raid.

1947: In the fourth issue of the magazine Rioki, publishes The Japanese Wife Who Wanted to Be Oppressed.

1951: Apr. Exchanges letters with Toshiyuki Suma until at least January 1954.

1951: Publishes a series of essays in the magazine Ningen Tankyuu.

1951: Mezoku Uramono Jo (Book on Secret Things in a Women's Jail), edited by Seiu Ito and intended as a supplement to be published inside Amatoria becomes a problem and is detached from the magazine.

1953: Edits a photo supplement to the January issue of the magazine Yomikiri Romance titled Etsugyaku Koukotsu To (Graphic Depiction of Ecstasy in Pleasure and Pain) with mainly kinbaku photos; it is the second such supplement by the magazine, the first one being published in August 1952, titled Nudo Fuzoku Arubamu (Various Nude Album) and edited by Ueda Seijiro who is generally considered to have been strongly influenced by Ito. These two supplements represent the first two publications entirely devoted to kinbaku in the period following the Second World War. The photos included in Nudo Fuzoku Arubamu are seen as pre-dating the first SM works published in Kitan Club.

1953: In the January issue of Kitan Club, he publishes a short piece describing his thoughts on Reiko Kita.

1953: Starts his fourth Seme No Gekidan (Torture Theater Group) with its activity centered around the Nakamura-Za Theatre.

1953: On June 4th, the group gives its first presentation in the theater Ishikawa Suzumoto.

1953: Second group of representations at the theater Nakamura-Za in July.

1954: Meets Toshiyuki Suma for the first time in person.

1954: On January 29th, NHK channel one broadcasts a radio interview about Torment Research.

1955: Photographer Hiroshi Kawaguchi pays a visit to Seiu Ito which begins their friendship.

1956: Forms a friendship with Takashi Tsujimura.

1960: Receives a prize from the Federation of Fine Art Publishers.

1966: Oniroku Dan's novel Ryoki no Hate (At the Extreme of Hunting for the Bizarre) is based on Seiu Ito.

1969: Some discussions are held with the Toei film company by Oniroku Dan to make a movie on the life of Seiu Ito; an agreement is not reached.

2002: Gedou no Mure is made into a movie under the title Oyou.

There is a full bibliography in Japanese in the related article on Seiu Ito at SMpedia. Below, we have listed books on Seiu Ito which are likely to be of value to those who cannot read Japanese.

Uzaemon XV Ichimura (1874-1945): One of the representative kabuki actors of the Taisho and early Showa period.

Rokurou Kitamura (1871-1961): Kabuki onnagata actor and member of the Shinpageki, a theater genre established in 1888.

Yaeko Mizutani (1905-1979): Actress, representative of the Shinpageki which she headed after the death in 1965 of Hanayagi Shoutarou.