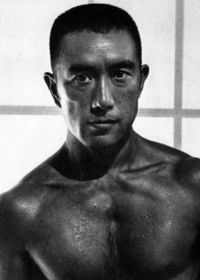 Writer, actor, and founder of right-wing militia "Shield Society," who also modeled for bondage photographs. Today, Mishima appears to be noted as much for his lifestyle and suicide by seppuku as for his literary works. 1970: Nov 25. The Shield Society attempts to take over the headquarters of the Eastern Command of the Japan Self-Defense Forces. There, Mishima gives an unsuccessful speech to convince the soldiers to revolt and restore the power of the emperor. Thereafter, Mishima attempts to commit seppuku, which leads to a slow and painful death.

Mishima was nominated for a Nobel Prize in Literature multiple times.

There is a lot of controversy around Mishima’s sexuality, with arguments depicting him as a gay, bisexual and straight.