Drachenmann, aka Matthias T.J. Grimme, is a Hamburg, Germany-based kinbakushi and publisher. (1953 - ) 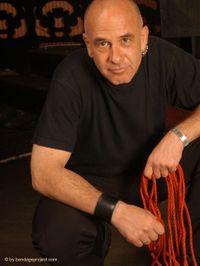 1980: Works as an organizer for the German men's movement and was a co-leader of men's groups.

1985: Publishes several books and articles about men and their relationship to themselves.

1990: Co-publisher and author of German SM magazine Schlagzeilen and also co-owner of the BDSM-publishing-house Charon Verlag.

1993: Begins organizing SM parties in Hamburg where he also performs rope- and SM-shows. Starting as a professional piercer.

Met Eikichi Osada at Studio SIX before his death in 2001.

His rope technique has developed into a mixture of his own style and what he has learned from Japanese kinbaku after several trips to Japan.

His style has come to be labeled the Hamburg School.