Gekko Hayashi is a prolific SM illustrator whose career spanned over 40 years in both vanilla and SM genres and who is famous for his illustrations of gay men. 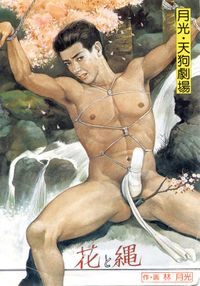 1923: Born in Hikawaguntaishamachi in Shimane prefecture.

1938: Submits drawings of stars to movie magazines, and after winning an award, Hayashi is inspired to become a painter.[※ 1]

1946: After the war, Hayashi returns to Shimane, where he works in sign painting and street theater.[※ 1]

1953: Resigns from the company and becomes a freelance illustrator.

1955(c): Due to ill health, Hayashi begins working as a book illustrator.

1955: Illustrates for Meisei and Heibon magazines.

1974: Hayashi is in charge of illustration for "Sabu" magazine at its founding.

2022: Hayashi's art is featured in the "Homme Fatales" exhibition at Vanilla Gallery.