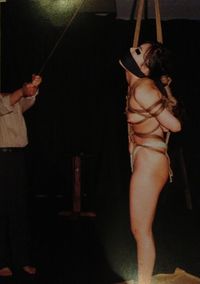 Is reputed to have had an impact on the tying styles of both Denki Akechi, Yoshikatsu Hayakawa and others.

Jubei Kamui is greatly influenced by and directed by Kenji Matsui as adviser of Mumonbaku.

Remained anonymous while tying for SM magazines and books (for example, "Oarutsurinohon").