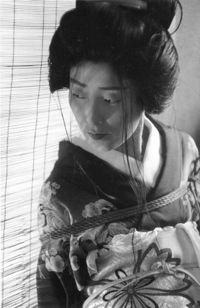 The second wife of Seiu Ito. She had an appreciation of kinbaku and modeled for Seiu Ito's illustrations and photographs. 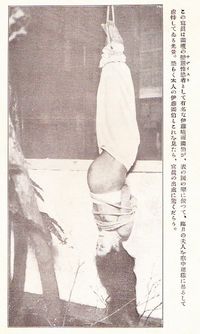 Photo of an Upside-down Suspension of a Wife in the Late Stage of Pregnancy (1921).

1920: Seiu Ito attempts his first suspension with Kise as the model.[2]

1921: In June, a pregnant Kise models for the photo known as “Photo of an Upside-down Suspension of a Wife in the Late Stage of Pregnancy."[3]

1922: In January, Kise models for Ito for a set of snow torment photographs.[4]

1923: February 10th. Kise modeled wearing a nagajuban at a hot springs inn called the “Yoshida Gardens” in Shimotokaido with the cameraman Raito Suzuiki[4]. Next, Kise modeled fully nude for snow torment photographs at a farm locale borrowed from Gajou Sakamoto, who was living at Seiu Ito’s place at that time.[5]

1924: Sunday Mainichi publishes an introduction on snow torment with Kise Sahara on June 1st which labels her a pervert.[1]