Kiyoko Yamahara modeled for Kitan club in the 1960s and became popular for her strong sadistic side. 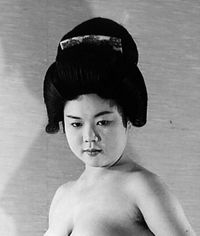 1965: The Kiyoko Yamahara fan club holds its first symposium in Osaka on June 27th. Minoru Yoshida and Takashi Tsujimura are among the 18 people who attended.[※ 2]

1971: A visit to Yamahara's snack bar is mentioned in a Salon Garakuki article. Yamahara is tattooed across her back and thighs.

In the October 1969 issue, "From the Editors" says "Yamahara settled into being a madam at a 'snack bar'."