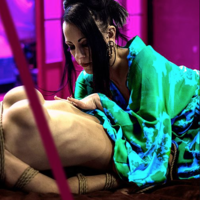 2011: Given the name "Reika" which takes the Kanji character "嶺"from her mentor and owner of MATRIX.

2012(c): Takes over management and operation of "SM Bondage Bar Matrix" from owner and her mentor Takamine Ren.

2013: Attends the 10th Annual Shibaricon as an instructor and performer in Chicago.

2013: Attends the Sydney Rope as an instructor and performer in Australia.

2015(c): Joins as a member of Cirque Shibari world performance tour (cancelled due to unforseen circumstances).