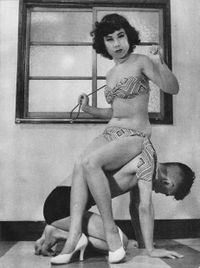 Rumi Kasuga first appeared in Kitan Club in 1954. In photos, she often played the role of a sadist who overpowered masochists. She worked often with Masako Ibuki and Shozo Konuma (Onuma). In private life, she was a mistress. She was also talented in kinbaku and writing. It appears she pursued kinbaku independently. 1930: Born in Osaka. Parents were an office worker and a shopkeeper.

1940s: Spends a lot of time around the red light district growing up.

1940s: After the war, Kasuga discovers her desire for dominating men during a relationship with a man who was four years older than her.

1950s: While looking at photos of women pressing high heels in men’s necks, Kasuga writes, “some kind of animal instinct flared up within my body.”[※ 1]

Rumi Kasuga’s bondage was credited as “Design by Rumi Kasuga”.[1]

Owner of “Bridge” in Shinsekai, Osaka, which broke new ground in gay SM. There is evidence[2] that Kitagawa[3] witnessed SM play between Kasuga and a male partner, and this is the basis for saying she was a mistress in private.