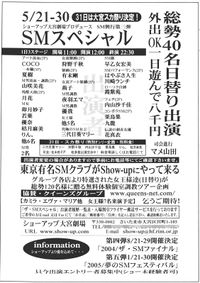 Show-Up Omiya is a strip club which has served as a venue for SM shows since 1970. Notable SM performers have included Eikichi Osada, Hiromi Saotome and many others. Hosted "The SM" series from 2003-2005, which then continues as the "DX Kabukicho SM Event."

Show-Up Omiya Started as a tiny strip club with seating for 70 guests.