It would not be an exaggeration to say that Takashi Tsujimura established modern Kinbaku Art. Encountering Kitan Club before Toshiyuki Suma, Tsujimura acted as a kinbakushi for virtually the entire run of Kitan Club magazine. He also contributed historical dramas during its pulp magazine period as well as countless articles, stories and reports. He became involved with other gravure magazines around the summer of 1951. When Toshiyuki Suma left Kitan Club in 1953, Tsujimura became Kitan Club's main kinbakushi. He examined classical bondage methods such as hojojutsu, but gradually he specialized in SM play and evolved these methods into modern bondage. Series like "The True Face of Bondage Models" (1955) and "SM Camera Hunt" (1964-1973) earned the support of many readers and established the style of "SM kinbaku as a practice." In 1968, Tsujimura became more involved in the media by serving as a bondage advisor to Teruo Ishii's "History of Tokugawa Female Punishment" and others. Together with Oniroku Dan, he became a driving force in the SM boom of the late 1960s and early 1970s.

1921: Takashi Tsujimura was born in Sakai in October.

1920s: Tsujimura remembers that as a 3rd or 4th grade elementary school student, he felt a strangely pleasant feeling being tied to a tree during a game of "cops and robbers"[1].

1937(c): The night before leaving for Manchuria, Tsujimura has his first bondage experience by tying his current lover (and future wife)[1].

1948: Tsujimura encounters Kitan Club magazine while working in a hardware store after his discharge from the military. He adopts the name Kanrou Shindo for his submitted works.

1950: The name Takashi Tsujimura is credited as author for “Hingou Ichidai Otoko” in the December issue of Kitan Club. p.22

1951: In July, Tsujimura does the photography for nude photos which were published in the January 1952 issue of Kitan Club[※ 1]. 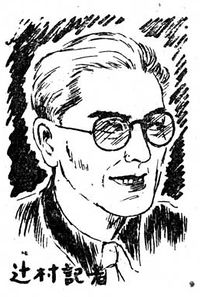 1953: Tsujimura leads "The Readers Roundtable on the Impulse Psychology Related to Mixed Pleasures Accompanying Torment" which appeared on p100 of the January Issue of Kitan Club.

1953: Credited for rope composition in the April and May issues of Kitan Club, with photography by Tetsuzo Tsukamoto.

1964: The first episode of "SM Camera Hunt" appears in the November issue of Kitan Club.

1965: Tsujimura falls ill with diabetes[※ 3] in May and took time off to recuperate until August.

1969: Tsujimura acts as bondage consultant for Teruo Ishii's "Pictures From Tales of Cruel Abnormal Abuse of Genroku Era Women" (Toei), where he himself appears in the role of a woodcutter. He also continues to advise the bondage for Ishii's "Tokugawa Tattoo Master - Torment Hell."

1970: Provides guidance for the bondage scene in Masahiro Shinoda's "Silence"[7].

1971: Tsujimura was interviewed by Youzou Tanaka for "Sankei Weekly."[8]

1974: Apr. He reports in "Junk Memo" printed on p.236 of the August issue of Kitan Club that he went on a trip to Izu with Mr. Minota and Mr. K of Tokyo, and that he patched things up with Mr. Minota after an uncomfortable one or two year separation[11].

The True Face of a Bondage Model

Related to "Camera Hunt," these reports delved into models' privacy, and led in part to the temporary sales ban of Kitan Club magazine. The series was terminated after three episodes.