Toshiyuki Suma played an important role in the formation of post-war SM culture. Suma did editorial work for early SM magazines such as Kitan Club, Uramado, SM Collector, Abu Hunter and SM Kitan. He is also famous for his SM illustrations and left behind a large body of work as a writer and kinbakushi. 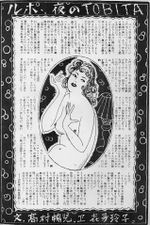 Since it is believed that Suma's autobiographies include some invented anecdotes, the biographical data below could contain inaccuracies. Therefore, the following biography may be corrected in the future.

1932(c): As a child, he encountered Seiu Ito's torment art in the book Documentation on Abnormal Customs, which he found in his grandfather's book collection[2][3].

1930s: Left the Kyoto School of Fine Arts at mid term and became the live-in apprentice to the Japanese painter Baisen Kobayashi[※ 2][2][3].

1945(c): Suma was discharged from the Navy and wandered across Japan and was employed at various jobs before becoming an editorial reporter for the evening newspaper Central Kyoto News.[3].

1947: summer. Kiyoshi Sugiyama, who worked at the Central Kyoto News, took Suma to the editorial office of Kitan Club (Akebono Shobo), which gave Suma a chance to begin drawing illustrations for Kitan Club[※ 4]. There were other irregularly published pulp magazines besides Kitan Club, and Suma drew illustrations for Jouen Shin-syu and others as well.[※ 5][3].

1952: Kitan Club changed from a size of A5 to B5 and promoted its "abnormal" content.

1955: With the cancellation of Fuzoku Soushi, Suma began working for Amatoria magazine (published by Kubo Shoten), and he launched Kappa the predecessor of Uramado.[3][※ 9].

1959: Intesified his association with Oniroku Dan around this time[Citation needed].

1960: Uramado changed from edge binding to inner binding and championed the "abnormal magazine."

1970: Suma and Chimuo Nureki left Kubo Shoten and founded Abu Production, where Suma was an executive head. They published Abment which terminated in Sep. 1970.

1970: Nov. Involved in the foundation of SM Select.

1971: Oct. Involved in the foundation of SM Collector.