From Nawapedia
(Redirected from Gote shibari)
Jump to navigationJump to search The gote takatekote is one of the principal tying techniques in modern Japanese kinbaku. It has many alternative names including takatekote (高手小手) and gote shibari (後手縛り). It also has more than one way to read the name, for example: gote takatekote, ushirote takatekote and ushirode takatekote. 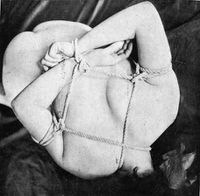 On the Beauty of Kinbaku in Gote Takatekote. Kitan Club. Apr 1953

Gote indicates that the wrists are tied behind the back. Takate is an old word referring to the area of the upper arm. This word can also be understood to represent a high position of the arms. Kote means wrist.

USAGE 1: Bondage that positions the wrists behind the back and rope is wrapped above and below the breasts where upper arms are fixed (see figure). The wrists are not necessarily in a high position.

USAGE 3: For most shibari in hojojutsu, takate, kote and neck are key positions that must be tied. In this sense, they can belong to gote takatekote (see for instance, Tsujimura's early shibari). They don't necessarily contain chest harness ropes. However, it is not clear whether the term "gote takatekote" existed in ancient times or not (probably not). It could be a new word invented in the 1950s to the 1970s. The word "takatekote" can be seen (at least) in writing in 1923, but it is not known whether it represents hojojutsu style or modern style. Modern style shibari with chest harness appeared in artwork in 1888 (Meiji era). It is highly possible that people at that time practiced a modern style gote takatekote in kabuki plays but it is not clear what it was called. Police in the Edo period (1603-1868) didn't use a chest harness (with limited exemptions). 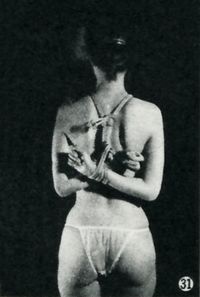